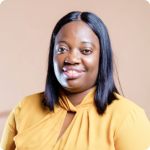 She is a member of several learned and professional organizations including computer professional Registration of Nigeria (CPN), Nigeria Computer Society (NCS), Organization for Women in Science in Developing Countries (OWSD), L’Oreal/UNESCO for women in Science for sub-Sahara Africa, Association for computing machinery (ACM), Institute of Electrical and Electronics Engineering(IEEE) and  AIMS Next Einstein Initiative (AIMSNEI).

Dr. Yinka-Banjo has supervised several undergraduate and postgraduate students, has many academic publications in reputable international journals and conference proceedings and has travelled to different countries to present her research work and findings. She has served in different capacities in her department, such as course advising for year one and year three, SIWES coordinating and currently, she is the examination officer of her department.

Chika is a recipient of many awards and grants. In 1997, she was a recipient of Abuja National Mathematics Centre academic award for best Mathematics Student in Federal University of Technology, Owerri. She also had an Award in 2009 to Study Mathematical Sciences at African Institute for Mathematical Sciences, Stellenbosh University, Cape Town, South Africa; L’Oreal-Unesco for Women in science in 2013 (fellow for sub-Saharan Africa) and A three -year scholarship for the award of PhD in Computer Science, at the University of Cape Town South Africa, from the organization for Women in Science for the Developing World (OWSDW) (August 2011 – July 2014). In 2016, Chika was a recipient of AIMS Alumni Small Research Grant. Dr Yinka-Banjo is married and blessed with three children.